Day of the Girl (I): Observing Girls’ Education.

“Give a girl an education and introduce her properly into the world, and ten to one but she has the means of settling well, without further expense to anybody” ~ Jane Austen.

Feminism has no truer values than those of equality, self-determination and independence. For only in learning to value the self, can one equally value others and live in prosperous mutually-fulfilling relationships with them.

October is an über cool month for women. It is an official women’s history month. It is also Domestic Violence Awareness month. More excitingly, it is the month that celebrates young girls! On December 19, 2011, The United Nations declared October 11 as the International Day of the Girl Child. The aim of commemorating this day was to focus attention on recognising girls’ rights, the unique challenges facing girls around the world, and to seek initiatives to empower girls. It is a day that brings light to the many issues that matter to girls, and to lift up voices around the globe to end practices holding girls back!

Two issues of paramount importance to the UN this year are education and child marriage. Accordingly, the UN’s 2013 observance focuses on Innovating for Girls’ Education. Why is girls’ education rightly a priority? 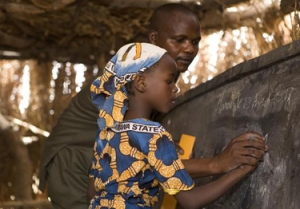 This two-part report documents the crises of child education and child marriage in the world today. It discusses the role these two essential factors play regarding girls’ rights and the implications, both positive and negative, of eradicating them. It also analyses the critical role religious supremacy plays in hindering an overhaul of these two predicaments that overwhelmingly affect girls.

Recent studies by Plan U.K reveal appalling findings about the state of girls’ education around the globe. Thirty-nine million girls between eleven and fifteen are currently not in school. One in seven is married by fifteen; and up to fifty percent in developing countries will have a child by eighteen! Matrimonial violence against girls who marry early can significantly affect their personal security and in many cases only results in them dropping out of school, further stunting prospects of improving girls’ access to education. In addition to these findings, studies by UNESCO show that the total number of school-age girls all together outside the 11-15 age bracket and out of school, supersedes the thirty-nine million figure and adds up to sixty-five million! Sixty-five million girls of school age across the world are not in school! In addition to these atrocious figures, when girls do attend school, their primary education and completion rates are below fifty percent in most poor countries. By the time secondary education calls, one in five of lower secondary school age is also out of school. A number of factors including violence, public security, economy and adherence to religio-cultural norms are responsible for these alarming findings.

A School Report assessing the lives of children from around sixty of the world’s poorest countries revealed underfunding and an unequal provision of education across gender, as two factors responsible for high rates of illiteracy among girls. Education budgets for poor countries have been on the receiving end of global financial crises, and have been slashed by as much as $4.6bn a year. The outcome isn’t any different in a given number of developing world countries that are reputably wealthy. Nigeria is the sixth biggest oil producer in the world, but it also produces the highest number – almost one in five – of children out of school in the entire globe. It dominates twelve other countries with which it accounts for 47 percent of the global out-of-school population. In comparison to boys, girls suffer the most and in far too many cases, girls are receiving only six months of education in their lifetime.

It is possible for developing world countries with enough resources to help themselves and tackle this prevalent problem of child neglect, but it will take the political will required to do so. When tackling this issue by alleviating funds to the education sector, it is equally necessary to combat traditional ways of thinking that may cause unequal provision of wealth across gender. The notion prevalent in many places that women should be raised for domestic roles and men for organising and running public life must be challenged and if possible, decapitated for the mere reason that it is strategically oppressive of girls. A woman is free to take on a domestic role in life if she so chooses, but women collectively, should not be raised specifically for domesticity.

It is extremely condemnable to uphold societal constructs which promote the discrimination of females, while expecting to create a truly prosperous civilisation – socially, materially, spiritually and intellectually. Females make up more than half of the world’s population. It is counter-productive to seek prosperity for the human specie, while strategically lauding women’s subjugation. Girls around the world are not only deprived of education, they are often punished for seeking knowledge. A crucial and recent example if not the most famous example is the case of Pakistani activist Malala Yousafzai. Malala was shot in the head by Pakistan’s Taliban (the country with the second-highest number of out of school children) for speaking out on the need to educate Pakistani girls. The Taliban is notorious for destroying girls’ schools in the Swat valley, which was where Malala and her family lived, while leaving boys schools untouched. Stunningly, Malala survived the shooting. The Taliban who has orthodox views about Islam has since claimed that it does not oppose education of girls per se, but is only opposed to Malala’s secular “satanic” curriculum and will shoot her again with the hope of killing her, if it ever gets the chance to. A senior member of the orthodox organisation wrote a letter to the sixteen year old, advising her to return to Pakistan from the UK where she fled for treatment and refuge, to join a madrassa and study orthodox Islam. Malala’s story is only one of many. There are many girls who are killed in the course of resisting the oppression of orthodoxy without any cameras or tabloids rushing to tell their individual stories. Very similar to the Taliban is another orthodox organisation Boko Haram who has similarly burnt down schools and killed students, avidly, under the pretext that “western [secular] education is forbidden”. Education is a fundamental human right as recognised by the Universal Declaration of Human Rights. Everyone deserves access to secular studies. Governments everywhere must demonstrate an unreserved determination to ensure that children and especially girls in politically volatile zones, are afforded this basic human right!

Education plays a vital role in equipping girls with the utmost basics to enable them fashion out prosperous lives for themselves. What’s the worse that could happen by educating a girl?

She could increase her own income and that of her family. She is more likely to have a choice about when she has a child. She is more likely to survive childbirth. Her children are more likely to grow up healthy and survive their first few formative years. Studies show that an extra year in school increases girls’ potential income by fifteen to twenty-five percent, and each extra year of a mother’s schooling cuts infant mortality by between five and ten percent. If governments around the world exercised much necessary will power, the increase of only one percent in girls’ secondary attendance in any country, could ultimately add 0.3% to the GDP of the prospective country. Education is vital, the key to emancipating women is in educating them. Practically, governments must provide